Are doctors the ‘second victim’? 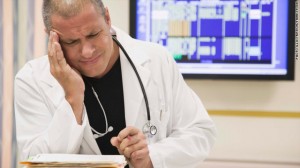 Up to 43% of doctors could suffer psychological problems after incidents

A recent investigation by leading healthcare experts reveals that doctors can be defined as the ‘second victim’ – clinicians who are traumatised by an adverse patient event, with professionals suffering distress similar to post-traumatic stress disorder. With such incidents affecting both the personal and professional lives of the medical personnel involved, suicide has been reported as an extreme reaction to incidents.

The research, led by public health doctor and NHS Clinical Leaders Network director Rajan Madhok, surveyed all nine UK-wide professional regulators, covering all clinicians; also asking NHS organisations in the North West about the number of professionals committing suicide based on these kinds of events. Despite very little information being available in this area, researchers discovered 16 suicides had been reported to the GMC since 2004.

One of the study’s key concerns was how accessible or effective the support structure is. Dr Madhok comments in the HSJ “While there may be internal audit data at some organisations, we found very little information on the effectiveness of support systems, particularly from the perspective of the people they are intended to help.”

The research’s recommendations to tackle these problems echo recent suggestions regarding the treatment of whistleblowers, which confirms that clinicians are feeling either marginalised or penalised for raising concerns. With challenging transformations planned for the NHS, this could be an uphill struggle for practicing medics.

The review found that between 10% and 43% of clinicians involved in incidents will suffer adverse consequences themselves, and about half of clinicians will become a second victim some time in their career, impacting not only on them personally, but also on professional performance and relationships. “Suicides are the tip of the iceberg of the much more prevalent ‘second victim’ phenomenon,” Dr Madhok explains.

With happier staff proven to deliver better care, the investigation emphasises the importance of individual support being combined with organisational help. Trusts are actively encouraged to learn from this style of incident and to demonstrate that they are doing do, and this is key for also caring for staff. Dr Madhok and his team raise concerns, linked to the treatment of whistleblowers. “A culture in which a whistleblower who reports unsafe conditions is at risk of being ignored, or even ostracised, lacks the necessary maturity.”