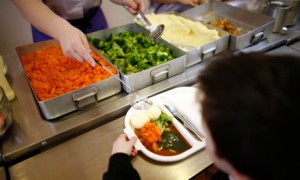 Fried foods cut back to only two days per week

New school food regulations have been released by ministers, revealing that fried foods including batter or breadcrumbs will be scaled back to a maximum two days per week, with a variety of vegetables and salad offered as an accompaniment every day.

The guidelines, due to hit state schools in January 2015, also say that at least three different vegetables and three different fruits have to be offered each week, with an emphasis on whole grain foods and water. Fruit juice and other sugary drinks are also under fire, being restricted to quarter pint portions. Pastry is also on the hit list, again only allowed to be offered a maximum of two times per week.

These new regulations will replace ones put in place after TV chef Jamie Oliver’s campaign, as the new guidelines will allow more flexibility for school cooks, and be easier to carry out.

Education Secretary Michael Gove told BBC News “We now have a clear and concise set of food standards, which are easier for cooks to follow and less expensive to enforce. Crucially we have achieved this without any compromise on quality or nutrition.”

Deputy Prime Minister Nick Clegg said “The revised school food standards will allow schools to be more creative in their menus. They are easier for schools to understand and crucially they will continue to restrict unhealthy foods to ensure our children eat well.”

Susan Jebb, professor of diet and population health at Oxford University said “It is vital that the food children are offered in schools is nutritious and helps them to learn about the basics of a healthy diet.”