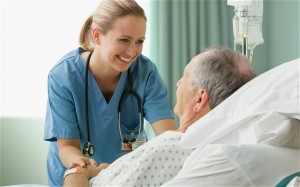 If nurse ratios double, then one extra death could be prevented

New research has revealed that the number of nurses available on the weekend affects a patient’s chances of survival after having a stroke.

Scientists discovered that the patients admitted to stroke units with the lowest ratio of nurses were most likely to die in the month after a stroke. Interestingly, weekend ward rounds by senior doctors did not seem to impact on the death rate. The findings are especially useful as more data suggests that patients admitted to hospitals at weekends do not recover as well as those who arrive during the week.

The PLoS Medicine study analysed data from 103 hospitals, noting the ration of nurses to patients present in the stroke unit at weekends. They also charted whether senior doctors did ward rounds on Saturdays or Sundays.

The results show that wards with an average of 1.5 nurses caring for 10 patients had higher death rates than wards with three nurses to every 10 patients. Experts calculated that if the nurse rations were doubled to hit three per 10 patients, then one extra death could be prevented for every 25 admissions.  They found most wards had senior doctors conducting ward rounds five days a week and almost half provided consultant rounds seven days a week. But there was no difference in death rates between the two groups. Although the research didn’t study the reasons behind these trends, suggestions imply that aspects of nursing care – such as attention to nutrition and hydration have a major impact on surviving after stroke.

Dr Benjamin Bray of King’s College London, who led the research, told the BBC “I would suggest the role of stroke doctors is still very important but the risk of death is the wrong thing to measure when considering their impact. Doctors play a vital role in speeding up recovery and helping people return home quickly. But we would need to carry out a different study to measure this.”

Dr Peter Carter of the Royal College of Nursing, said “It is unacceptable that stroke patient mortality rates are higher at weekends when staffing levels tend to be lower. Driving up standards of patient care in the NHS requires commitment to investing in the nursing workforce. We’re worried that this isn’t happening and that there remains much more work to do in providing safe staffing levels for every health setting.”