Why more doctors may not be the answer to doctor shortages 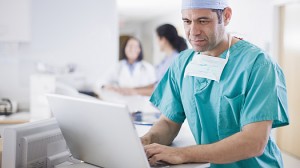 Prominent medic Joshua Liu, MD has stated that hiring more doctors is not the solution for the American doctor shortage, and that instead, closer focus should be on how healthcare is going to evolve over the coming years.

Writing for The Health Care Blog, Liu, who is also CEO of SeamlessMD, analyses predictions from the Association of American Medical Colleges, which suggests that the US could have a shortage of approximately 90,000 doctors by 2020, whilst in Canada, the problem areas are highlighted as doctor unemployment due to poor infrastructure and bad workforce planning.

Liu argues that while access to care is vital for patients, instead of concentrating on the numbers of doctors required for a growing population, the question should be how care can be adapted to provide for an expanding population in a cost effective way.  “The major problem with workforce planning models is that they assume healthcare delivery of the future looks very much like healthcare delivery of the present. That the future will continue to be, in many ways, very doctor-centric. It won’t,” Liu explains.

Lui believes that the influence of technology is often underestimated, as well as it’s impact on delivering healthcare. He continues “Over the past few years, we are already seeing that some processes of care can be shifted from in-person doctor-patient encounters to virtual care (telemedicine, doctor-patient messaging, etc.). We are seeing increased consumerisation of healthcare (e.g. activity trackers, self-management apps, etc.) and as we enter the age of technology-powered convenience, patients are expecting healthcare to come to them.”

Predicting a boom of digital health over the next 10 years, Lui feels more patients can be cared for by less doctors. Another trend Lui identifies is the ongoing shift of roles from doctors to other healthcare providers, for example, community care such as nurse practitioners. He concludes by saying  “As the culture in healthcare makes the shift from provider-centered care to true patient-centered care, the need for more physicians will fall with it. Once we stop equating ‘more care’ with ‘more doctors’, we are one step closer to building a more sustainable healthcare system.”

Do you agree with Lui’s opinions on the healthcare industry?