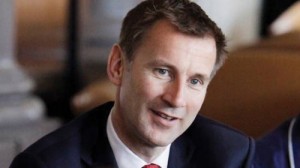 Statistical slip of the tongue from Jeremy Hunt

The UK Statistics Authority has warned health secretary Jeremy Hunt, over claims he made about accident and emergency waiting times in England.

After reviewing the information, chair of the UK watchdog Sir Andrew Dilnot said Mr Hunt was incorrect to say in Commons that median waiting times to be seen in A&E departments had halved since 2010. A government spokesperson has responded to the scolding, saying  it had “simply been a slip of the tongue on Mr Hunt’s part and that the numbers used by him and the prime minister were accurate” although Labour insist Mr Hunt was “found out making dodgy claims”.

Prime minister David Cameron told the Commons on 2nd July that the average wait for an A&E assessment had more than halved from 77 minutes under the Labour government to only 30 minutes under the coalition. A week later, Mr Hunt repeated the same statistic but specifically referred to a “median wait”. Sir Andrew did not criticise Mr Cameron but said the health secretary should have used the term ‘mean’ instead of ‘median’.

Sir Andrew said the statistics showed that the mean time elapsing before patients were assessed was 30 minutes in 2012-13, down from 77 minutes in 2009-10. On the other hand, the median wait for assessment fell from nine minutes to eight minutes over the same period. The mean is calculated by adding up all the numbers and dividing by the number of numbers. The median is the number for which half the numbers are above and half below.

In a letter addressed to shadow health secretary Andy Burnham, Sir Andrew said “Statistics are often described in abbreviated terms, particularly during public debate, and caveats are not always repeated or indeed possible. However, it is important for statistics to be described carefully. Where possible, time periods should be specified, the source data should be identified, and particular care should be taken if the mean and median are substantively different.”

Mr Burnham told BBC News “Sir Andrew Dilnot confirms that waiting times in A&E have got worse on this government’s watch. But his analysis concludes that things are even worse than we thought, with hospital A&Es missing the government’s lowered target in every quarter for almost two years. This is a damning verdict on David Cameron’s and Jeremy Hunt’s mismanagement of the NHS and their desperate attempts to paper over the cracks. The gap between their spin and the reality for patients is becoming dangerous.”