IR35 Update: NHS to assess locums on a ‘case-by-case basis’ 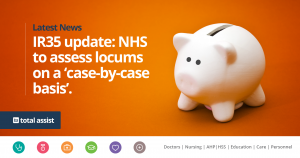 Nearly 2 months after the new reforms of the IR35 legislation went live (see our previous article on IR35 here) clients and contractors are still getting to grips with the new taxation laws.

The point of the new changes which were made back in April 2017 was to shift the responsibility of determining how a contractor is taxed from the individual(s) to the client. The repercussions of this meant many clients were worried that they would be liable for any wrong assessments of their contract workers and decided to place them all within the IR35 bracket.

This blanket approach to assessing contractors has been no more prevalent than in the public sector; especially the NHS. High proportions of the 1.5 million+ NHS work-force are locum, agency and bank staff who were told that they would all now fall inside the new IR35 regulations and would be placed on hospital payroll.

The controversial decision has meant many healthcare and medical professionals are considering a move into the private sector to avoid the new legislation. Under the new IR35 rules, many locum workers could stand to lose out financially and shifting to outside of the NHS would give them assurance that they are being taxed correctly.

Many feared that an already under-staffed NHS would struggle further if many of their contract/agency staff vacated for the private sector. As a result, NHS Improvement has subsequently retracted their decision and as of the 30th May will be making decisions on IR35 on a ‘case-by-case basis’. This means hospitals and trusts will now be expected to review each contract worker individually, taking each person’s unique circumstances into account and making a decision based on this.

This reversal in policy will go some way in reinstalling locum’s faith in working for the public sector. NHS Improvement is now directing hospitals and locums towards HMRC’s online assessment tool (www.gov.uk/guidance/check-employment-status-for-tax) which will determine an individual’s IR35 status. The tool however is a working progress with HMRC still making changes and updates as of this point in time. NHS Improvement have suggested that in addition to using the online tool that providers and locums should also seek ‘independent tax advice’ to make sure the correct ruling is made. Failure to correctly assess a contract worker could mean NHS providers are liable to pay any additionally owed tax.

If you are unsure whether you fall inside or out of the IR35 bracket or you would like more information. You can contact one of our friendly consultants who will be more than happy to help