Is beef a bigger global warming threat than transport? 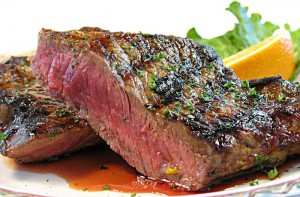 Virgin business mogul Richard Branson has declared he has given up eating beef to reduce global warming.

Writing on his blog, Mr Branson explains how modern day meat consumption is said to contribute to global warming and environmental degradation, estimating that 14.5% of global man-made greenhouse gas emissions come from livestock – which is more than the contribution from all forms of transport. Beef production is said to make up 41% of the livestock emissions.

“Last year, Brazil reported a 28% increase in Amazonian deforestation – 80% of deforested land in Brazil is then used for cattle farming. This results in a huge loss of biodiversity. Modern beef farming is also a huge drain on water resources. A 2010 study calculated that it takes 1799 gallons of water to make just 1lb of beef,” Mr Branson said.

Whilst advocating options such as synthetic meat, as supported by Bill Gates, as well as eating insects for protein, Mr Branson suggests that cutting back on beef will also help with maintaining food levels. “70% more food will be needed by 2050,  and we can’t solve this problem by simply continuing to make ‘conventional’ intensive farming more intensive. Reducing our consumption would reduce the need for these industries to keep up with that demand,” he said.

However is it healthy to drop this form of red meat from your diet? A report on Toronto Sun explains that beef contains 14 nutrients, including twice the iron, six times the B12 and eight times the zinc of a chicken breast, also being lower in fat than chicken thighs. Dr Martha Grogan from The Mayo Clinic also explains that grass-fed beef contains less total fat, more heart-healthy omega-3 fatty acids and more antioxidant vitamins, such as vitamin E. Beef is usually assumed to be fatty, however dietitian Karine Barlow puts these worries to rest, saying “There is this misconception that the fat in beef is all saturated fat, but 50% of it is monounsaturated – the same kind of good fat that’s in olive oil.”

What do you think? Do you think giving up beef can save the planet, or should we just be more conscious about the cuts and grades of meat we use?