Should you be eating 5 or 7 portions of fruit and veg a day? 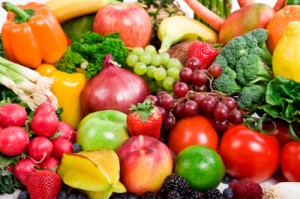 The latest research supports the advantages of eating five portions of fruit and vegetables each day, however it also suggests that eating additional portions may have no added benefits.

Experts reported in the BMJ after an analysis of 16 international studies, that for every portion of fruit and vegetables consumed, there was a lowered risk of premature death, however after five portions there appeared to be no further impact on health. Previous research has suggested that the advice be changed to recommend seven portions per day, but currently, most people only manage to munch through four.

The new findings were discovered after looking at results from the US, Asia and Europe, involving more than 833,000 people, of whom about 56,000 died during the follow up period. Researchers from both the US and China pinpointed that eating more fruit and veg was linked with a lower risk of dying from any cause, but in particular cardiovascular disease. The average risk of death fell by about 5% for every extra serving of fruit and vegetables, up to five servings each day but not beyond.

Prof Frank Hu, of Harvard School of Public Health, in Boston, US, told BBC News “This analysis provides further evidence that a higher consumption of fruit and vegetables is associated with a lower risk of all-cause mortality, particularly cardiovascular mortality. There was a threshold around five servings of fruit and vegetables a day, after which the risk of all cause mortality did not reduce further.”